By the end of this school year, about 3,100 Caddo Parish second graders will have been exposed to water safety skills that could one day save their lives.

The 29-week “Swim for Life” program, which began Aug. 28, is the result of a partnership between the YMCA of Northwest Louisiana, Caddo Parish Schools and the Community Foundation of North Louisiana. But its genesis goes back to 2010 and the tragic drowning of six teenagers here in the Red River.

“Sadly, as we researched this, I could not find a similar program in a municipality that was not started without having a tragedy,” said Gary Lash, Y executive director.

The local incident was spotlighted at the 2016 YMCA General Assembly, attended by about 4,000 people, in Kansas City. Lash came back to Shreveport focused on finding a way for the new BHP Billiton Y facility and its 50-meter pool, under construction at the time, to be a source of lifesaving instruction for the community.

“With this facility, we don’t need to hide it under a bushel,” Lash said. “We need to figure out how we can serve the community back.”

Support from Caddo Parish Schools Superintendent Lamar Goree, staff and board and a one-year $86,000 grant from the Community Foundation paved the way for Swim for Life to start this fall, a gigantic undertaking at any time, but even more daunting just five months after the new Y opened and brought in a flood of new members. Lash said those factors were considered, but staff supported jumping right in.

“I think every day that you wait, it could be a child’s life,” Lash said. 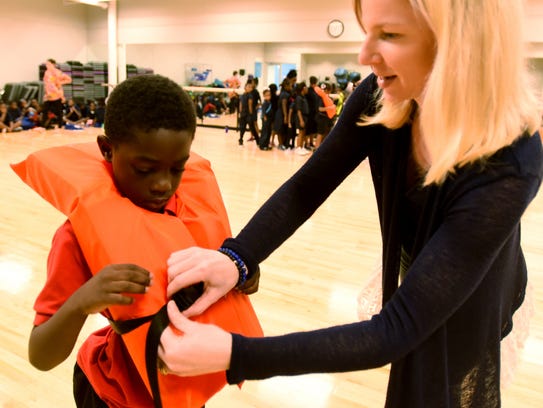 “It’s a great development time before they really set a fear of water and they’re still wanting to try some things,” Lash said. “Physically, it’s a good time to do that with their skill levels, and they can hear instruction. Younger children taking instruction might be more difficult. And they’re real excited about doing this.”

“It’s not a learn-to-swim program,” stressed Mason McGee, Y aquatics director. “It’s a safety-around-water program. We’re not teaching freestyle. We’re teaching how, if you find yourself in a bad situation, you get yourself out of it as quickly as possible. Most drownings occur within six to 10 feet of safety – falling in a pool, falling off a boat, stepping into a lake or river – so you think within that six to 10 feet, if you had the skills, it wouldn’t take a ton of effort to get back to the boat or back to shore or back to the wall.”

Each day the pool portion focuses on two main skills.

One is called Swim, Float, Swim.

“The goal is just to get them out as quickly as possible,” McGee said. “Swim, dog paddle, kicking, it doesn’t matter to me. We want them moving forward. The float part, they roll over on their back. It doesn’t have to be a perfect dead man float, we just want their mouth out of the water so they can rest and get that air. Then they roll back and they start propelling forward again, so it’s a sequence of back and forth. If you think about trying to lift your head out of the water, if you’re on your stomach, you lift your head up, your legs sink and that’s going to make it very difficult to stay up on top of the water, so that’s why we encourage them to roll over onto their back.”

Heidi Gerkin with Cornelius Johnson at the YMCA’s “Swim for Life” program. It is the result of a partnership between the YMCA of Northwest Louisiana, Caddo Parish Schools and the Community Foundation of North Louisiana. (Photo: Henrietta Wildsmith/The Times)

The second skill is called Jump, Push, Turn, Grab, which simulates falling into a pool.

“What we want to become instinct with them is that they would push off the bottom. As they push off, they turn around and they should be able to grab right back where they came from.”

Classroom instruction includes how to properly wear a life jacket, boating safety, how to recognize an unsafe water situation and how to assist someone who is struggling in the water without putting yourself at risk.

“We teach these kids Reach or Throw, Don’t Go. Find something that floats. If you can, reach a stick out to them. Get them an item to help them stay on the surface as opposed to you going in after them.”

But one of the potentially most effective lifesaving techniques the students are taught every day is also the simplest: Always ask an adult permission before entering water.

While all the second-grade classes in Caddo Parish will have their turn at the pool, the schedule deliberately started with schools in the areas of highest poverty.

“When we started targeting populations, we really looked at percent of poverty so could target those individuals who wouldn’t have those experiences naturally,” said Keith Burton, Caddo Parish Schools chief academic officer. “What we found is those kids don’t get the opportunity to go to the swimming pool, they don’t get opportunities to get lessons, even though these are not swim lessons per se. It certainly was worthwhile to take time from their regular classroom time to be able to give them this opportunity.”

The students’ reactions to time in the pool vary widely. Some are fearful and it might take a day or two of coaxing by their instructor to even get them in the water. But, surprisingly, when asked if they can swim, many raise their hands.

“That’s scary from my perspective because I know that most of these kids cannot swim,” McGee said. “It becomes very evident early on that these kids can’t swim, that they have this kind of false sense of confidence, so in addition to teaching them these skills, we’re also trying to teach them what’s realistic, what can you actually do and what are you safe doing.”

By the fourth day, the kids are smiling, giggling and eager for their turn in the pool.

All of the instructors have been trained by the Y and are responsible for no more than six children at a time, with a maximum of 60 students and 10 instructors in the pool at once. Extra lifeguards are on duty to keep watch. While the instructor works one-on-one with a student, the others sit on the side of the pool with their legs in the water waiting – often impatiently — for their turn to enter the water.

As you can imagine, the Y is cultivating a large pool of trained instructors, since most of them aren’t available every week. They are paid a small fee, required by the grant, and it’s not unusual for the money to be donated back to the Y.

“We’ve been fortunate to have instructors from the whole community, from the Air Force, some lawyers and some physicians and some city employees,” Lash said. “I think as the interest grows, more people will want to participate.”

One of those instructors is Larry Russo, general counsel at Kinsey Interests, Inc.

While Russo was hesitant to sign up – not for lack of interest but out of concern about his busy schedule – now he plans to do it again.

“It’s a compelling concept and a great program and it was definitely worthy of my time,” he said. “The good news was that every time I went out and participated, I felt the rewards that I experienced far exceeded whatever I was unable to accomplish at the office.

“The children were just delightful. They were hilarious. Their skill level in the pool spans a pretty broad spectrum, but every single one of them, no matter how fearful they were, had a wonderful time and were excited to return every day. When I walked out every day, I had a kind of a euphoric feeling about it. It’s one of those feelings you get after accomplishing something.”

Burton says the response from parents and school staff has been extremely favorable.

“It was funny because we really were so worried about what parents would think and their fear and what we found is, after that very first time, many of the parents and guardians started showing up at the Y because they were so excited about having their child participate. We’ve heard nothing but positive things, the families, the schools, everyone has been so excited about providing the children with this chance. It’s been nothing but a very rewarding and positive experience.”

Brienda Claville appreciated the opportunity for her 7-year-old son, Betravion Abbott, a J.S. Clark second grader, to participate in the program.

“I feel like every child should know how to swim,” said Claville, who went to the Y to watch her son’s lessons. “Kids are very active when they’re around water. If someone was to fall in the water, they would know what to do. I just thought it would very good for him to do it, since I can’t just teach him how to swim. He’s enjoying it and very comfortable with it. If I was trying to teach him, he would be very paranoid and thinking I would yell at him or something. He’s enjoying it with his classmates.”

While it’s still too early to talk about the future of the program beyond this grant year, everyone involved would like to see it continue and expand, perhaps with the help of corporate sponsors.

And both Burton and Paula Hickman, who recently retired as executive director of the Community Foundation, have nothing but praise for the Y’s willingness to reach out to the community.

“We really want our children to have good water safety skills and to learn that water is nothing to be afraid of, but you have to respect it,” Hickman said. “We are so appreciative of the Y and all the donors who gave to create such a wonderful facility. We are happy the leadership at the Y is willing to take on such an enormous project such as this because I think it really could be transformative for the kids in our area to have safe fun around the water.”

And McGee says saving lives is the bottom line – even though it’s unlikely staff will ever know if they were successful.

Shreveport Parks and Recreation operates a summertime swim program at city recreation center pools that was also born out of the 2010 Red River tragedy.

Called Project Swim, it’s a partnership between the city, Rock Solid and the Fannie and John Hertz Foundation, which funds it with an $88,000 yearly grant, said SPAR Executive Director Shelly Ragle.

Since its inception in 2011, almost 10,000 residents, ranging in age from 2 to 82, have received free swim lessons. Each session includes five 70-minute lessons.

Since swimming is traditionally a part of recreation programs, Ragle said the city wanted to try to prevent future tragedies.

“It was important to us for us to do our part,” she said. “We can’t do everybody and that’s why it’s exciting to see what the Y is doing at that second-grade level. It takes us all.”

If you are interested in being a part of this drowning prevention effort and becoming a Swim For Life Instructor, please contact Michelle Roberts, Marketing & Communications Director | 318-674-9635 | micheller@ymcanwla.org